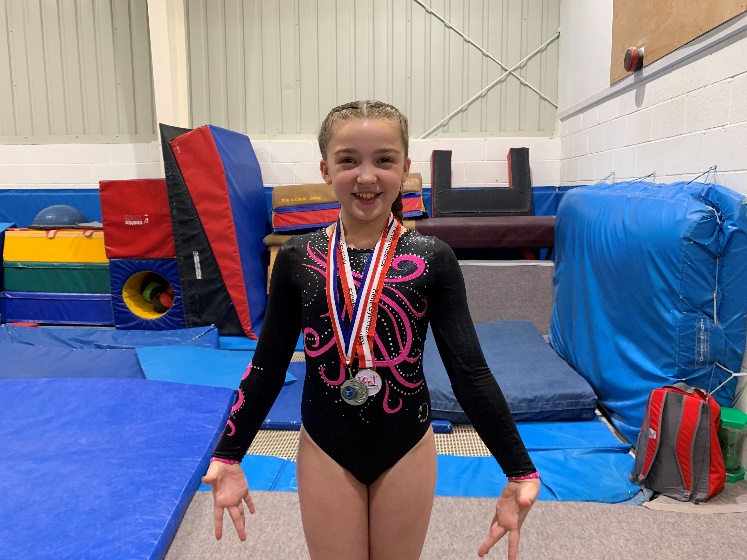 Two of our young gymnasts have performed brilliantly in the last few weeks. Serena McCormack has just competed in The Floor & Vault Championships and came fourth.  She is a member of The Canterbury Gymnastics Club Young Leadership Academy and has recently attended an Introduction to Coaching and Judging course. Serena was also presented with The Secondary Girl Gymnast of the Year Award at The Canterbury Gymnastics Club Awards Evening.

Josie Cooper has just won the Kent Twin Piece Championships which makes her the current four piece and two piece champion and she won a  silver medal on the beam.  She is also one of the Young Leaders and volunteered at a British Gymnastics National Event called Gymfusion at the Olympic Park in London. Josie won the Modified 5 Gymnast of the Year and was part of the School Milano Group that won Team of the year at the awards evening. Both girls have worked extremely hard on their gymnastics this year.

Elliot Jones is in his first outdoor season for bowls. Prior to this, he’s played indoor and he is now doing both versions of the game. In the winter season, he made the regional finals as well as representing the County.

His outdoor season is going well. He attended under 25 squad days at the beginning of the season and recently he went to Oxford to play against Oxfordshire. Elliot plays with Jack and Harry Wimble-Roberts which means there are three Canterbury Academy bowlers representing the county under 25 age group.

Jamie Keir competed in The English Schools National Championships on July 15th and performed brilliantly. He ran a brilliant 1500 metres in the semi-final which meant that he qualified for the national final. In a very strong field, Jamie ran a great race and ended up getting a new personal best of 4.13.36 which meant he came fifth in the race making him one of the top under 14 runners in the country at this distance. This is an incredible achievement.

A Canterbury Academy team of girls and boys travelled to Margate beach on Friday 5th July for the annual Kent School Games Beach Volleyball competition. We were the only school at this competition that entered a side into every category – U13 Boys and Girls and U15 Boys and Girls.

All four sides did well to win their opening games. At one point, it looked like we were going to take a full sweep of medals. The day finished with the Under 13 Boys’ team taking top spot. The Under 15 Boys’ team finished a close second in their event after a recount on the points.

A huge well done to all of the students involved.