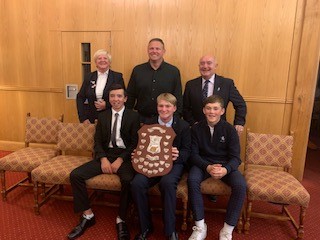 Year 9 student, Tom Paterson, performed brilliantly for his county in a golf match against Surrey recently. Kent had not beaten Surrey for over ten years but Tom’s performance and final match winning putt clinched victory for Kent. Tom trains regularly at Boughton Golf Club and has worked very hard on his golf this year.

After impressing in trials and match play, Jack Wimble-Roberts, has been selected for the England Youth Academy for Bowls. This is an impressive achievement for Jack and a reward for the commitment he has shown to his sport this year

Four of our year 10 BTEC Sport students made a positive impression on staff and students at Boughton Primary School last week. Daniel Oni, Axel Andres, Mario Dimas and Bradley Born all helped support a school football festival. Headteacher, Mr Simon Way, commented on the boys’ performance. “They were extremely supportive of the children, recognising that they had different levels of ability and refereed matches in a sensible and friendly way. They had set up drills as planned but this then turned into some bespoke training for the different teams. All four were a credit to the school and were polite and enthusiastic.” Supporting the community through this sort of initiative represents an important part of our role as a school and these four students have done themselves proud due to the way they worked last week.

An excellent performance from The Kent Crusaders Basketball Academy saw them defeat Itchen 87-84 in a really close match. Year 12 student, Kieran Farrell said that “it was an amazing win for us and the game was full of runs by both teams and had high intensity but I felt our offensive power and defensive toughness carried us to the victory.”

A group of our young students went to Essex University to watch the Women’s British Basketball League opening tournament last week. This was a great opportunity for the girls to be part of a campaign to promote and encourage girl participation in sport.

They were also lucky enough to see former student Tamara Fournillier-Onadeko play for her new club Barking Abbey London Lions and it was really inspiring for them to see a fellow student at the highest level of basketball in England.

Our equestrian team will soon be back competing again and there was excellent news last week when Year 10 student, Tallulah Murrell qualified for national dressage finals and topped the young rider rankings.