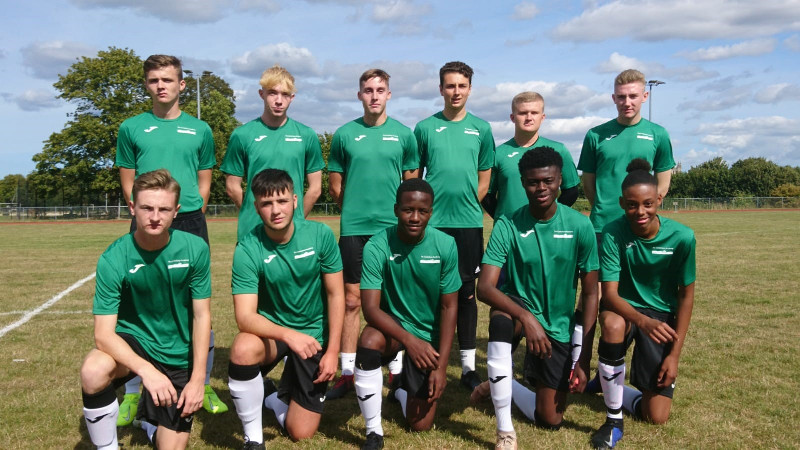 Football Off To A Flyer

The Canterbury Academy 1st XI football side are off to a brilliant start. They have been training since the middle of August when our new coaching team got them back early for pre-season. They won a friendly against Wrotham School 4-1 last week with Obi Okeke claiming a hat trick. Their first league game against Brompton Academy finished 9-1 with the entire team performing really well. Obi Okeke scored four with the rest of the goals being shared around. Congratulations to Head Coach, Bryan Taylor and his support team of Spencer Creedon and ex-student Matt Simmonds who have all done a great job with the side.

In a new development, our football training for years 8,9 and 10 takes place on a Friday afternoon with all teams working together under the supervision of our PE staff and Bryan. Around 40 students attended the first session and games start next week in the district league and county cups.

Our Year 7 footballers have had two training sessions with over 45 of them attending on Wednesday.

Details of all of our clubs can be found in the sports centre corridor and for information on our Sixth Form Sport, please visit https://www.canterbury.kent.sch.uk/sixth-form/

Year 10 student Dan had to travel to Suffolk to compete in the British Open Clay Pigeon Shooting Championships recently and finished third after several rounds of shooting.

This is a great achievement and we look forward to hearing about how he gets on in his next competition.

The athletics track season is over and Year 10 student, Jamie Keir had a fantastic year. He produced some brilliant races and became the Kent & Kent Schools’ 1500m champion. He ended up coming fifth at The English Schools’ Event and was ninth in the national finals. He produced an all-time Invicta East Kent u15 record and claimed a Bronze medal in the Southern Championships as well as a silver in the 3km race. Jamie Keir Completes Excellent Track Season

Success for Gaia Jennings in Gymnastics

Our Year 9 netball team played their first match of the year on Tuesday at Archbishops. The girls are a newly formed team with some of the girls taking part in their first netball match for the school. They played The Whitstable School in their first game and after going 2-1 up in the first half, they struggled to retain their lead after some exceptional shooting from the opposition and the game finished 4-2 to Whitstable.

The second match against Archbishops saw our girls pulling together as a team and they demonstrated some excellent work in both attack and defence. There was some outstanding defending from Joanne Bamgbose and the girls went on to win 5-2.