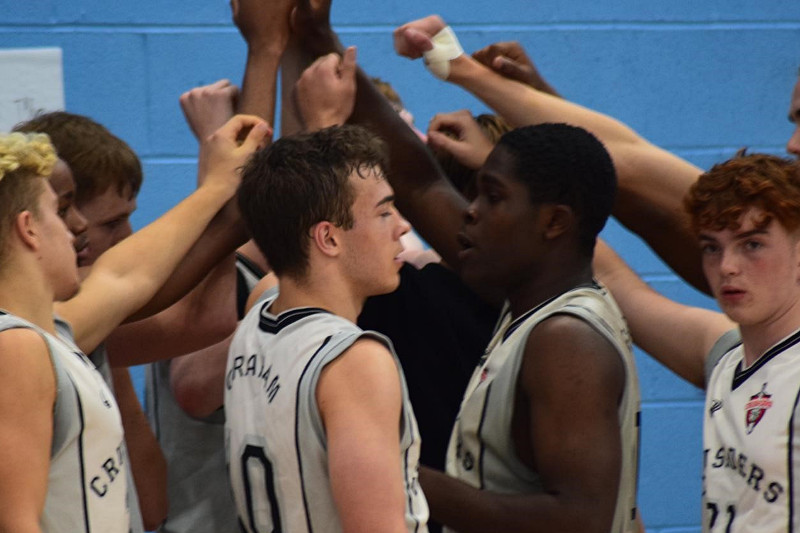 The Canterbury Academy Crusaders opened the EABL season with a scrappy 88-69 win against City of London Academy.

A combination of 20 second half points from Will Raife and Canterbury connecting on 15 three pointers proved to be the difference, allowing Canterbury to pull away for the victory.

Canterbury Head Coach Adam Davies was pleased with how the season started saying: “With ten practices under our belt and a couple of friendlies we were prepared but didn’t really know what to expect. We just wanted to set our identity and build on what we have put in place. Players are beginning to understand the style of play we need to adopt being undersized and the standards we have in defence. I’m looking forward to reviewing the game and getting four more practices under our belt before the next step on our journey next week.”

The basketball academy programme is part of our specialist sports provision in the Sixth Form which allows students to receive professional coaching and sports science support on a daily basis over the entire school year.

Year 11 table tennis player, Lewis Marsh won a junior competition in Nottingham last weekend conceding only two legs in the entire competition. Lewis is currently on a specialised timetable allowing him to devote extra time to his training alongside his academic studies.

Year 7 student, Ollie Scott, ran a great time in the 1500 metres at Erith last weekend and managed to get a silver medal for his efforts. Oliie’s performances in athletics have meant that he will access specialist athletics coaching with our coaches on Wednesday afternoons to complement the work he currently does at Invicta East Kent Athletics Club.

Our Year 7 and Year 8 netball teams have played this week and faced some challenging games against Herne Bay High School and The Whitstable School. Despite losing the majority of their matches this week, the girls have played with spirit and determination and the Year 7 team came away with a win from their match day.

The Under 14 girls’ football side beat The Abbey School 2-1 on Wednesday. The goals were scored by Romilly Evans and Sienna Shipton but it was an impressive all-round performance. Please congratulate the girls if you see them round the school – Amelia Kerseley, Joanne Bamgbose, Deena Geeves, Skye Cage, Megan Coleman, Afnan Alsoufi, Beth Rich, Sienna Shipton, Briony Clayson, Romilly Evans, Mollie Martin and Layla Logan.

Our Sixth Form football side continued their fine start to the season with a 4-1 win away at Ursuline College and our junior sides have started the season steadily. The Year 10 team beat Ethelbert School 7-1 in the Kent Cup on Tuesday afternoon with Alex Giles scoring a hat-trick. Earlier in the week, they had drawn 1-1 with QES with Fin Newnham grabbing the goal. Our Year 9 team drew 0-0 with Herne Bay High School on Thursday afternoon.

School football training has been excellent this term with a large number of students attending and getting involved. Full details of training times and nights can be found on the PE Extra-curricular Timetable.